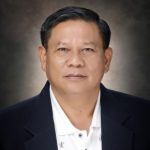 Dr. Gregorio Z. Gamboa, Jr. was formally welcomed by the SSCT community on January 18, 2016, 2pm, at the Academic Center in a ceremony that also served as a turnover of responsibility from outgoing Officer in Charge Dr.Ecclesiastes T. Dumanig to Dr. Gamboa.

Present during the welcome and turnover ceremony was former SSCT president Dr. Gloria C. Gemparo, a classmate of Dr. Gamboa during their scholarship at Marikina Institute of Science and Technology where they both took up Master of Technician Education or MTE major in Educational Management.

Dr.  Gamboa bested two other shortlisted candidates to the presidency.  On January 7, 2016, all three, Dr. Gamboa, Dr. Posesano, and Dr. Ramel Tomaquin had a final interview with the members of the Board of Trustees after which the election followed.

Having been elected, Dr. Gamboa was immediately sworn into office by CHED Chair Dr. Patricia B. Licuanan on January 7, 2016 at the CHED Central Office in Quezon City.  Witnessing Dr. Gamboa’s oath of office were CHED Commissioner and SSCT BOT Chair Maria Cynthia Rose B. Bautista and the rest of the BOT members.

The 6th College president began his speech by introducing himself, saying that he was born in Lanao del Norte but grew up in Cebu.  He also cited his humble beginnings noting that his deceased father was a construction worker and his mother, now 88 years old, was once a sidewalk vendor in Carbon Market in Cebu City. Dr. Gamboa said he was proud that his parents were able to send him to school.

Dr. Gamboa, born on March 6, 1959, is married.  He and his wife have three daughters who are now all professionals.  He has four grandchildren.

In his acceptance speech, Dr. Gamboa said despite being told by some people that entering SSCT is like entering a snake pit, he believes that “the people of SSCT are a group of learned men and women. People with vision and aspiration toward the development of SSCT.”

Gamboa added, “I cannot do it alone.  Only through your help, cooperation, and complementation that SSCT’s mission, vision, goals and objectives can be achieved. “

The new College president also called on everyone to throw their “extra baggage” or the bad experiences that they had encountered on their past journey.

“I come here with the spirit of brotherhood. Let us work together to achieve SSCT’s greater heights in the next few years and beyond,” Gamboa said in closing.

Not a President to Only a Few People

“I am the President of this institution, I am not a president of only a few people.”  This was the statement of Dr. Gamboa during the first general faculty meeting that followed the welcome ceremony as he called on people to feel free to see or talk him about any concerns they may have.

The College president emphasized a lot of things as he answered questions from the faculty during the open forum.  He said he is an output oriented person and wants everyone to work as team and must never resort to finger pointing.

Dr.Gamboa said, “I’m only here as your navigator.  I need you to achieve the goals of the College because without your support and cooperation, I am nothing and I would be useless.”

When asked about the quest of SSCT to earn a University status, Dr. Gamboa said he is 101% interested to work on the Universityhood of the College.  But he added that internal problems will first have to be ironed out for things to function more effectively.

He also revealed that soon, a quality assurance department will be created to continuously monitor the performance of each and every one.

Aware of the problems with regards to the enrolment system, Dr. Gamboa said he will sit down with the IT people for a plan to fully automate the enrolment process including the possibility of an online enrolment.  He added that each department could also look into having their own enrolment system.

Addressing the concern raised by Federated Faculty president Mr. Jonas L. Miranda on the issue of the delayed salary of guest lecturers, Dr. Gamboa said a right and appropriate system must be established to solve the problem.